Everyone is talking about BIM - what is it? A short introduction.

You have heard about BIM - Building Information Modelling. But you are unsure about what it is exactly. You might have some idea of it, and have possible heard some definitions and explanations before.

BIM is 3D modelling. BIM is modern CAD. BIM is automated validation & checking. BIM is easy data sharing. That's the essence of what you usually hear. All of these are true, but what does it actually mean?

Back to the Roots

There's a saying in Germany: You don't see the woods for the trees. It means that sometimes, getting lost in details makes you miss the whole. So let's focus on that. Without trying to sound tautologic, BIM is simply the modelling of building information.

In traditional design processes, there are a lot of small, independent parts. Be it plans, overviews and sections, but also parts lists, bills of quantities, issue boards or customer requests. There's also such things as minutes from meetings and even rental contracts and maintenance logs.

All of these parts are isolated, often without or with very little relation to each other. Also, a lot of these would not even be considered core information but only supplemental documents. So right now, you don't plan a single building but a lot of small details. You plan a facade, then you plan a floor. You define some interface points, but then you change the facade and don't consider the information that you've written down six weeks ago in the meeting with the customer. You also now have made changes in one place and probably missed at least one other document you should also have changed. Wherever you have duplicated data, there's a lot of potential for conflicts.

That's where the spirit of BIM comes into play: Everything is part of the building model and, by extension, describes a truth or a fact about the (future) building. Together, all small parts form one coherent idea. PDF drawings and door lists are just two different views on the complete data.

This means BIM is not a single method or a specific software, it's the combination of all available data to a true, digital model of the building. You do model the building itself and then generate views of it instead of the other way round. When talking about BIM, this encompasses both the tools (like CAD applications) as well as the processes (consolidation of data in a single, canonical model).

In practice, going full BIM does require a bit of effort and a shift in habits. There's new things to learn, after all. But those who have already done it overwhelmingly realized that it is worthwhile to them and their business.

Let's imagine a project developer standing on a green field. She's got the idea to build a new office complex, right here. BIM starts at this moment. The model is only an idea in someones head at the moment, and in a very early stage. But nonetheless, it's going to grow over time. These first thoughts will form the base for future decisions. Soon, the first drafts are created and shared.

The idea of BIM says, data is always in the context of a model. That's why modern companies have BIM Managers, specialists who coordinate and manage the flow of data and their processes. They ensure no knowledge is lost or duplicated.

Software for the AEC industry (Architecture, Engineering & Construction) is more and more focused on interoperability. This means, tools from different vendors, across disciplines, are able to share data.

Standards like GAEB, BCF and IFC offer numerous possibilities for efficient data exchange and even cooperation on the same model. In the BCF specification group, we made a short clip that demonstrates how modern workflows are done with the latest technologies:

Traditionally, the most resource intensive tasks in a design process happen in a very late stage. The detailed design phase is where most of the planning happens, even though at this stage, a lot of hard-to-change decisions have already been made.

In Germany, this is even more negatively enforced by the HOAI (Fee Structure for Architects & Engineers, German: Honorarordnung für Architekten & Ingenieure). This mandatory regulation structures construction projects in phases, with each phase having a defined work to be done and a percentage of the total project sum that can be billed for it. Since there have been no major changes to it in the last decades, it presents now an enormous hurdle for architects & engineers that want to adopt BIM. Especially in contrast to neighboring countries, German professionals have a huge disadvantage due to the lack of BIM proficiency and a huge discouragement to adopt BIM due to outdated regulation.

To visualize the differences in work schedules, Patrick MacLeamy, CEO of the US-based HOK Architects, defined a small diagram: 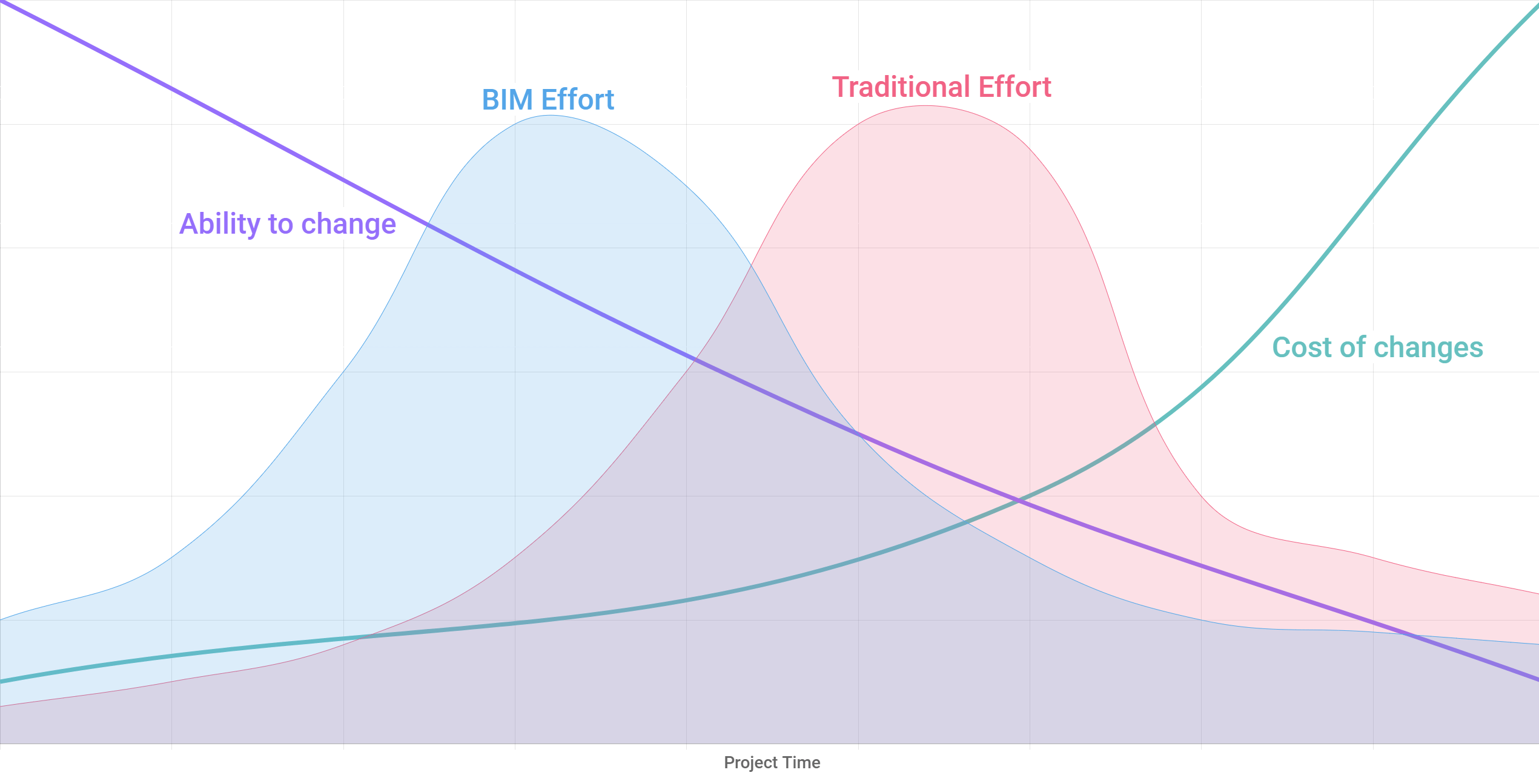 At first glance, the difference in when the most work is done is obvious. With BIM, the workload shifts to comparatively earlier stages of the process, when changes can still be done easily and at small costs. While not even BIM can guarantee error-free workflows, the amount of costs incurred due to late changes and undetected errors is drastically reduced. Companies that are already successfully using BIM report savings of more than 50% in regards to error- and failure induced costs.

What are my Advantages?

Many end users are unsure how they can personally profit from BIM. Maybe this is just a trend that goes away and you can skip the time to learn something new? After all, you still get work done today - most buildings get built, eventually.

That's right, but when being honest, one has to admit that the construction industry has been lagging behind all other industries in the last decades when it comes to productivity gains. While branches such as mechanical engineering and software development make huge leaps each year, construction companies are still operating at the efficiency of 1995 (in 2017). Possibilities of the digitalization, the new industrial revolution, have been neglected. But this is changing now with increasing pace.

There are, of course, many more positive examples for BIM. One of them, automatizing labor intensive work, is very obvious. Especially when it comes to data extraction, tools can do in seconds what would have taken humans days. Additionally, data is more and more linked with other data. For example, it's now becoming standard to link GAEB files with the actual building geometry and never again miss a change.

Do you want to know more about BIM? Then contact us!